Skip to content
The Buchanans Rolling Down The Road Uncategorized October 8, 2019 2 Minutes

So it started today, the first ten units to be prepared for the winter season. We have our little trailer with the antifreeze and a pump to push the antifreeze thru the trailers water system, we have an air compressor to blow the out the water out of the water lines before charging them with antifreeze. We have to drain the hot water heaters, ice makers, any thing that has water can and will freeze, and when water freezes it expands and whatever has water in it will crack or break…that’s just the facts of physics. 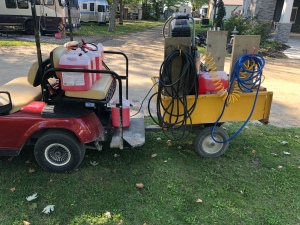 With a skid of antifreeze, there must be quite a few on our list, I think Richard said sixty to seventy, the number doesn’t really matter its just a task that we need to complete. Richard has been doing this for a lot of years and remembers a lot of the trailers, so we can make sure we don’t miss any items like an outside sink Richard spotted on a new to the park trailer in the first group of ten, it was located in a small compartment only about eight inches high, one I would never have expected it and it was obvious enough the trailer owners had never used as it still had antifreeze in it from the previous year. But missing something like that would certainly ruin an exciting opening weekend in May!

We have booster cables to operate slides as necessary to get to things tucked behind the slides. As we recommend that the owner disconnect the batteries over the winter months and in a perfect world they would take them to recharge them over the winter as lead acid batteries loose about 8% of their charge each month especially in the cold. Almost every hot water heater has a by-pass and the by-pass allows us to charge the rest of the water lines with the antifreeze without filling the hot water tank, as it is just left with the drain plug removed until spring. We always have to be on the look out for outdoor showers, outdoor kitchens, plumbing for washing machines, ice makers, and of course water filters.

The process is not difficult, but is time consuming, as without two people working at it, there would be a lot of steps in your day. So one does all the inside work while the other does all the outside work, and for right now me doing the inside seem to be the quickest. Oh boy only another sixty to go…..