Skip to content
The Buchanans Rolling Down The Road Uncategorized September 27, 2019 4 Minutes

So you may remember Bob and Irena from earlier in the summer, they came to visit us back in July, we gave them the tour of the park and we looked at a couple of sites that were coming up for grabs at the end of the season. You know the kind of tour I would call a kiss and giggle tour, no serious talk just a lot of what ifs, we spoke of the parks amenities, and the virtues of seasonal as opposed to being transient, but it was just some light discussion over a few cocktails, and this is not the kind of thing you jump into without some serious fore thought.

So the next thing I know, they have put a deposit down on one of the sites to hold it for next season, when Miss Laurie told me I was about in shock, I mean yes it’s a great park and all but this was a pretty serious commitment, one visit to the park, never had been seasonal, always just booked a few days at a time, and now you move to seasonal.

When we started this journey I could never understand the draw to a seasonal parks, until we were able to made such great friends at every park that we have settled into for a month or more Why Arizona our first park brought us Ralph & Jenny, Jerry & Cindy, John & Lynn, the list goes on and that was a one month stop. At the Codroy Valley last summer in Newfoundland, we met Robert & Susan, Dennis & Alice, Jason, you might be seeing a trend developing here. And then last winter in Florida there was Butch & Betty, Ray & Karen, Gilles & Francine, so now I’m really starting to understanding the draw to longer stays, but that only works if you are going to be social, if you avoid the events or don’t get involved you are going to miss so much. Many people spend the winters or summers with the same people, at the same park year after year every year.

We have not made that kind of commitment yet, still way too much country to see, but in the next breath we are trying to decide how to see as many members of our new RV family this winter as possible, as we bounce around Arizona. As we try to plan we have Bob and Shari near Ehrenberg, Gilles and Francine near Yuma, Ray and Karen near Phoenix, a long list of boondockers in the desert around Quartzsite Larry, Brian and Susan, Craig and Bonnie, John and Val, Ron and Julie, this is a group we met boondocking at Three Lakes wildlife management area in Florida last November, and we haven’t been able to track down John and Lynn and where they will be yet but want to hook up to talk trash about the state of our Canadian politics. And we want to wander by a little town in Ohio in early November to catch up with Butch and Betty as they will be in Florida this year, so would like to spend a day or two as we pass by on our way to Arizona.

This list of people is the reason why we need a mix of long and short term spots, we met (Brian, Ron, Craig and John) “the soggy bottom boys” in Florida at a twenty day boondocking encounter, they instantly accepted us into the community and even trucked fresh water for us, I guess what I’m trying to say is living life to the fullest is what it is all about, making new friends with similar interests has become a much bigger portion of this new life style that what I was ever expecting, the amount of people living this life style is way beyond any expectation that I had. These are relationships that wouldn’t get a chance to grow when you are just overnight campers, so it is with pleasure we welcome our long time friends Bob and Irena to Lake Huron Resort for the 2020 season, and I hope they embrace of the great community that already exists in this park as it is a huge part in choosing a seasonal park. Every park has water, electric and such, but not every park welcomes you in as a long lost member of an extended family, the way this one does, the amenities are such a small portion of the seasonal experience as they will soon learn.

Well that got a little long winded, but I just can’t explain how much our life has changed by choosing this life style, and I also cannot explain why it seems so easy to make such great new friends, we lived in the same house in a small town for seventeen years and did not make as many friends as we have made in less than two years on the road. And that is all I can say about that…at least for now

So this last weekend Bob and Irena spend time prepping their new site, levelling a deck, cleaning up debris, pruning overgrown trees, laying some gravel at the back of the site and planning a small garden. Then on Tuesday I gravelled the site and set their trailer next to the deck, so it’s official…welcome to Lake Huron Resort Bob, Irena, and Alex the proud new holders of site 167…for 2020. 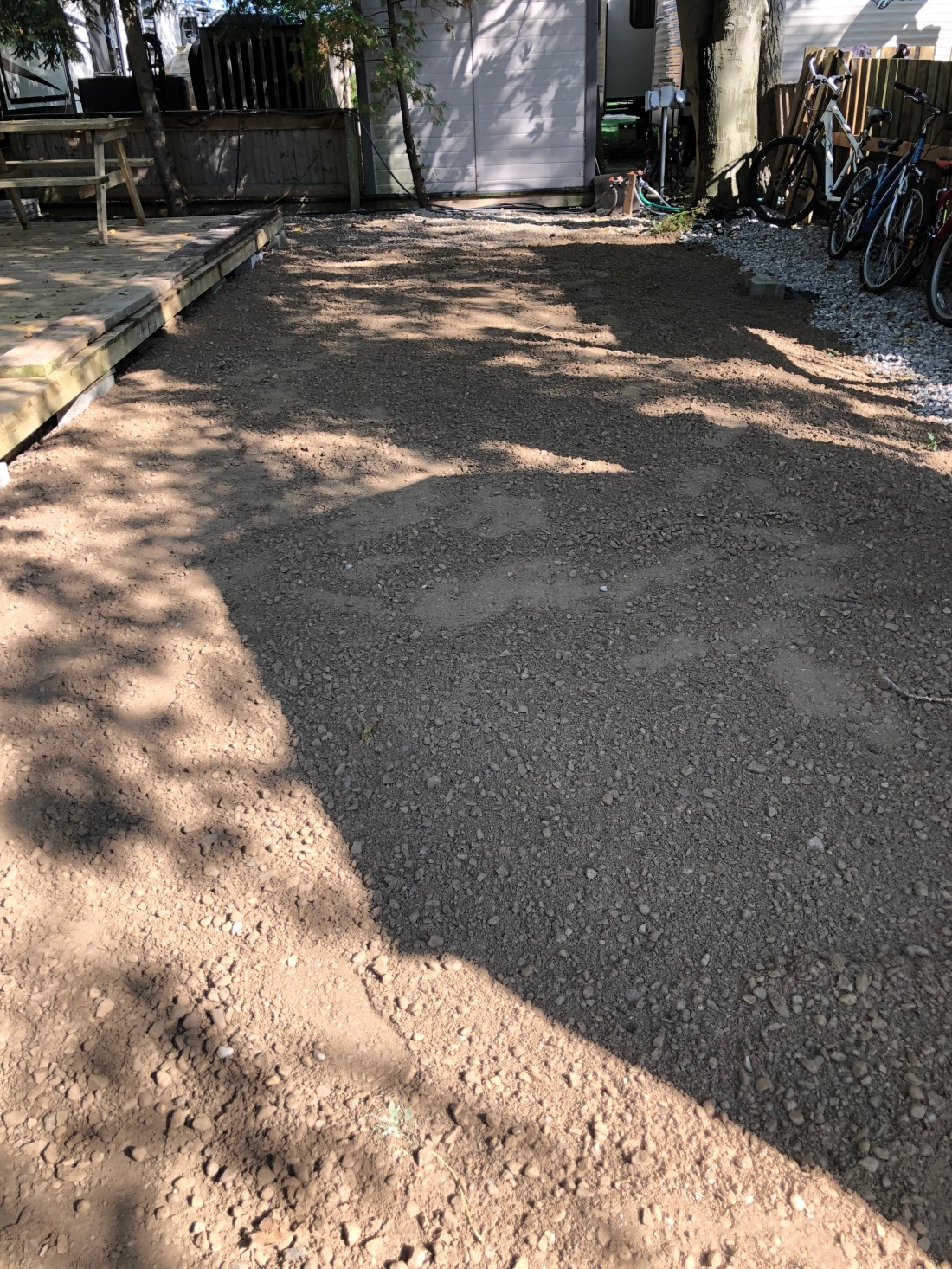 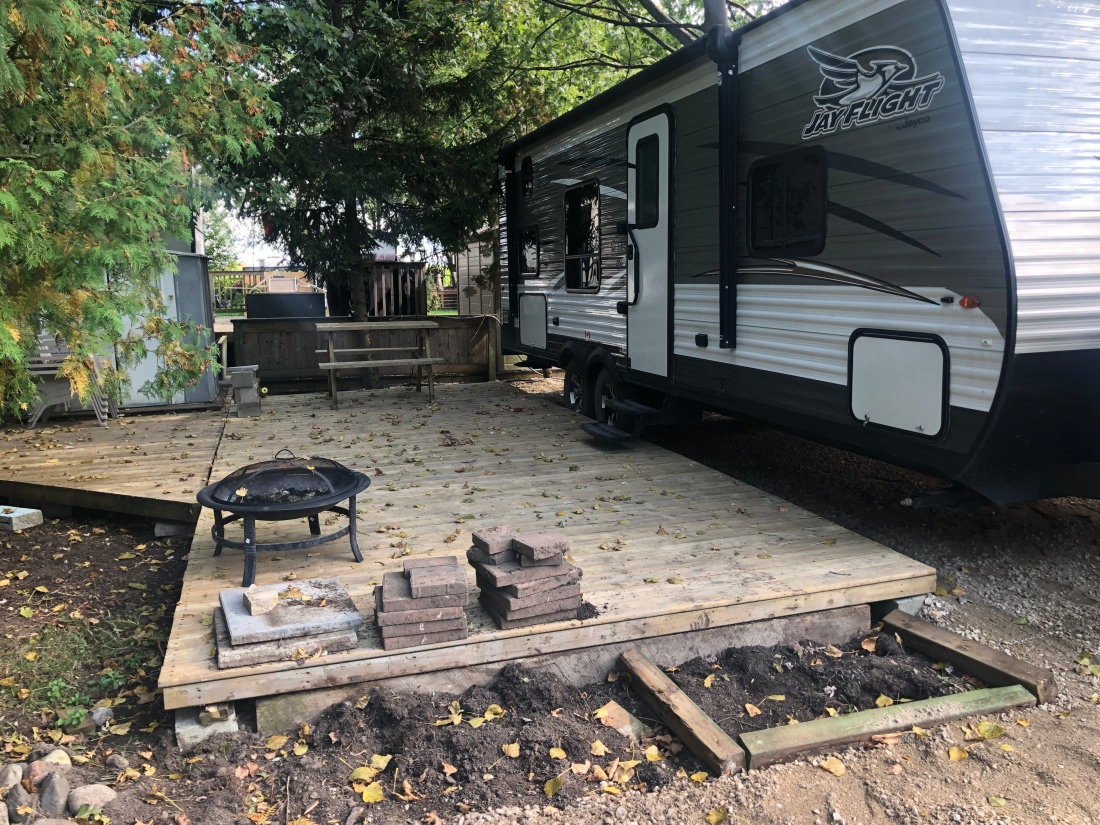