We always talk about our RV family, the people you met on the road that quickly become part of your life, well in August of 2018 that was Robert and Susan. We were in the Codroy Valley in Newfoundland, staying at a beautiful park on the Codroy river when we met Susan at the community camp fire. She was playing guitar and singing the songs of Newfoundland when Laurie and her hit it off she had just closed a house deal and were ordering a wide body Mercedes Pleasure-Way van to travel but it wouldn’t be ready till the spring of 2019. Her hubby was cooking at a mining camp for a few weeks and would be joining her soon. 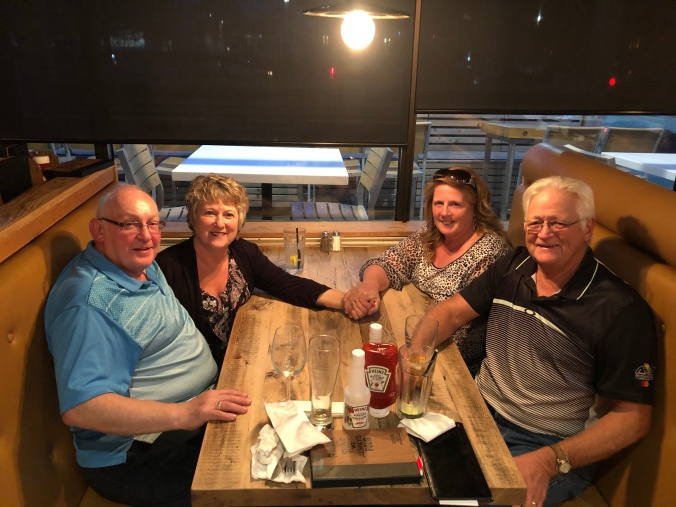 They had rented a trailer at the park and were going to stay there till the end of the camping season, then they were going to house sit a home in Nova Scotia for the winter until their van was ready. And of course visit with family on the island as well over the winter. Susan was from the Codroy Valley and Robert was from Port Aux Basque which is on the south west tip of the island and where one of the ferries from the main land docks. So we had the best tour guides for that area, with many adventures in the area with the history from the locals. Took us to some of their favourite spots and restaurants, introduced Laurie to a touton which is bread dough fried in a cast iron skillet which when stuffed with bacon was Miss Laurie’s new go to for breakfast when out.

Susan had worked in health care and Robert had been on the ferry for many years, some of the tales of their lives were great, and we have become true friends. So when we heard they were in Ontario to pick up their new van we made a point to meet them for dinner, they were staying with family in Woodstock ON, which is my home town so we met them for dinner at a local restaurant to catch up on the past eight months…and when they found out we were managing a campground only an hour and a half away they came to spend a few days on the shores of Lake Huron so we could really catch up.

And now they are headed off to visit more family in the Milton area before taking the van back to Newfoundland to pick up all their thing that are in storage (you can only bring so much on the flight) and how to be heading back across the country in September so maybe our paths will cross again soon. It is always hard to so real friends go but it makes seeing them again so very sweet.