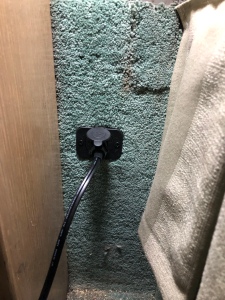 Well I get to check one item off the to do list. This one cropped up after we received our 12 volt box fan from Amazon in Florida, we had been boondocking in the Three Lakes area of Florida with fellow full timers Ron and Jullie & Andy and Bonnie and they had these great 12 volt fans that they set in the windows to keep the air circulation in their coach. And even in December we were having some uncomfortable warm evenings from the heat so we decided to order a fan once we had a shipping address in Florida.

As we were on full hookups at Oak Grove Park in Florida (glamping), I ordered it just before our departure back to the great northern tundra. It was at this point the realization that we did not have any 12 volt outlets other than at the dash area and of course the cord on the fan was only 60″ so it was very limited on where it would be effective and on our adventure north as we were lot surfing there were a few warm evenings.

I had ordered these little kits (they came with a face plate and a converter from 12 to 5 volts) some time ago with the intention of installing them either side of the bed to charge our electronic devises as we have apple phones that have the worst batteries ever developed, they are always in need of a charge. But rather that just trying to piggy back on a circuit already designated with a load, I wanted to add another fuse panel to run numerous 12 volt circuits with the end goal of eliminating having to plug in a 120 converter to charge a 5 volt device. Even to an old fart like me understands inverting from 12 volts DC to 120 volts AC then converting back to 5 volts DC did not make a lot of sense, not even taking in to account all the losses just on efficiency, 12 volts DC to 5 volts DC eliminating the inverter seemed like the right approach.

So I ran two new circuits from the new fuse box one to each side of the bed, (I did run 14 gauge wire not the 18 gauge that came with the kit – like seriously) allowing for either the fan or just charging of devices and the task was not monumental but still eat up a couple of hours by the time you run the wires, drill the holes, mount the plates, test the circuit, and of course get Laurie to clean up after me…

The task complete we now have a couple of 12 volt outlets, now if it warms up enough we can use the fan for cooling in the mean time we can recharge the growing number of items that can charge from the USB ports, it seams that as we move away from items that take disposable batteries and get more rechargeable item more and more the use the USB ports I have a couple more solutions for recharging devices with out needing to use the inverter…stay tuned.