Skip to content
The Buchanans Rolling Down The Road Uncategorized September 3, 2019

Ok I finally pulled the trigger, we now have a new barbecue, a portable folding two burner 12,000 BTU barbecue and I must say it’s pretty nice. Our old portable was getting a little long in the tooth. It was a closest to the pin prize that I won in a golf tournament years ago, but it became our only barbecue since we hit the road. It was tough to keep lit on windy days, and only had one burner so indirect heat was impossible, while it had a great igniter it would seem to flame out on low temperatures causing some issues. So it was just time to upgrade.

So our purchase was a Napoleon 285X Pro, it has a folding X frame, has 285 square inches of cooking space, and has a higher lid to allow cooking larger items. Hoping we will be able to cook a small turkey in it as I seem to be able to control the temperature pretty accurately. It has an optional flat grill that we cooked some frozen pizzas on. Being able to hold about 400 with indirect heat. While not perfect was an improvement over the convection oven in the coach.

We have grilled vegetables, pork chops, ribs, steaks, burgers, wieners, sausages, and chicken all to perfection and with no issues. Have operated it in some windy conditions and have not had a flame out yet. Even have cooked a beer can chicken a few weekends ago, even if Laurie didn’t think it’s tall enough to be done. The dual burner makes cooking meat and grilling vegetables possible and we also have a warming rack to get things away from the heat when necessary.

The ignition system seems more like a flame thrower but has work flawlessly, the grills are cast and transfer heat well, it is quick to warm up so throwing a couple of wieners on for lunch has not been a problem. I have missed the ability to cook with the indirect heat source so hope to do some low and slow items either on the flat grill or in the Dutch oven. Will have more time for experimenting over the winter months out in the Arizona desert, where time will be plentiful and the cool nights will make soups and stews the desired comfort food. 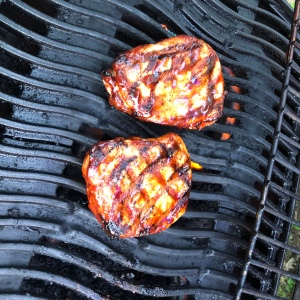 This barbecue will definitely take up more room in the basement than the old one but I feel that the sacrifice of space is worth it, I have to rearrange the first compartment any way as the Joey bed system has never been allowed us to be properly utilize the space because of the fresh water tank location, so by removing it, I will gain some needed height for a number of items and it will also make way for a small beverage fridge which should free up some space in the main fridge plus make grabbing a beverage a little easier. 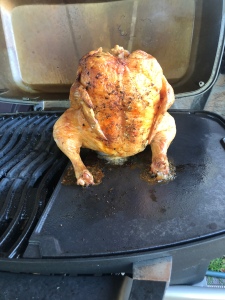 I considered doing an unboxing and assembly blog but other that putting the wheels on to came out of the box ready to go, it was already mounted to the X frame so simple and fast did spend some time seasoning the cast grills but pretty quick and simple to set up and knock down for storage, so feel free to stop by for a burger anytime you want…

View all posts by The Buchanans Rolling Down The Road