Skip to content
The Buchanans Rolling Down The Road Uncategorized September 22, 2019 2 Minutes

Teresa and Greg have rented an Airbnb cottage in Point Clark, which is located a few miles north of us on the shore of Lake Huron, they have travelled all the way from the big city of Toronto, to the west coast of Ontario…it’s always great when family come to visit. This was a planned visit and we had been looking forward to it for weeks. As I have said before, this work camping position has been great but it has made it nearly impossible to get together with family. So when family can make a visit here part of their vacation it is so nice and we very much appreciate the time.

Andrew who is just five is a very active young boy so some pool time, a while on the playground, and some game time with his dad. And that was just the first few minutes of their visit. How quick we forget the ambition of stamina of children, and the attention span their mind is just going a million miles a minute, way beyond what I could even start to keep up with.

Greg works for the provincial government in the procurement division and Teresa is with the ministry of health, so they have chosen Toronto as their home, and have a house just south of the Yorkdale Mall for those of you familiar with the city. They embrace the city and all it has to offer from major sporting events to festivals and multi-cultural issues which are everywhere. So as they prepare to send Andrew off to school, the French immersion program only makes sense and the culture mix that he experiences everyday will equip him so much better for today’s world than I ever was.

So after a short visit on Sunday we made plans for lunch at a local brewery on Monday after coffee at the coach as that was their check out day from the Airbnb in Point Clark. We chose the Cowbell Brewery in Blyth, we had been there before and I enjoyed a number of their beers. Now Greg and Teresa take the craft brewery to a whole new level, and actually record what they sample and how it compared to their favourite brews, it sounds like a great idea but I’m more interested in the drinking at the moment, but always forget which ones I liked then best, so maybe in my case I should just record the ones I don’t like, which could be a very short list…just saying 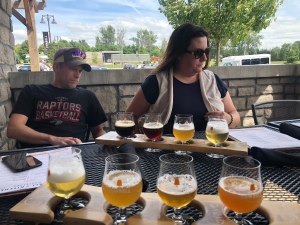